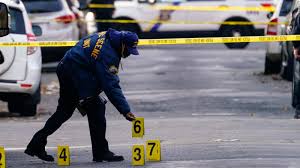 Police officers at a crime scene.

In the last decade, our country has seen a dramatic increase in gun violence, and yet our government has failed to respond. Expectedly, a heartbreaking 4,618 deaths related to guns and 113 mass shootings have been reported by the Gun Violence Archive (GVA). In 2013 a non-profit organization called the Gun Violence Archive (GVA) was formed to provide accurate information about guns to the public. Since then, they have been tracking information related to gun violence throughout the U.S. as of April 2022.

Gun violence is a familiar topic during political campaigns. There have been a handful of gun control bills that have become laws, only to be later repealed. Many lawmakers have tried to pass bills for gun control, but have not been successful due to the second amendment. Without gun control legislation, the U.S. has seen a rise in homicides; in the early 1900’s the U.S. had been experiencing a rise in homicide. As a result, President Franklin D. Roosevelt passed what is considered to be the first gun control legislation in 1934. The U.S. does have federal restrictions on who is able to carry a gun within the country, although at the state level there are varying rules. After the Sandy Hook shooting the House of Representatives and its speaker Nancy Pelosi put together the Gun Violence Prevention Task Force to come up with the best way to solve gun violence. The current vice president, Kamala Harris, is an advocate for gun control and was one of the top advocates for it when she served on the Senate.

The World Population Review notes that Alaska, Mississippi, Wyoming, New Mexico and Alabama are the 5 states with the highest death rates by guns. These states all share a common factor–they all are very loose with their gun restrictions. In this situation people who may be unfit to own a gun are still legally allowed to, leading to more unnecessary deaths.

School shootings are one of the most notable x-factors in the gun control debate. The House of Representatives Gun Violence Prevention Task Force was created as a result of one of the most widely known school shootings of the century: the Sandy Hook shooting, resulting in the deaths of 27 people, 20 of which were students between the ages of 6-7. Other school shootings have been more recent including the shooting that happened locally at MCPS’ Magruder High School.